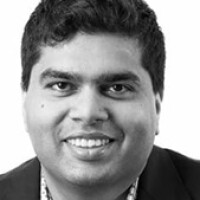 Manoj Nair is chief executive officer and co-founder of HyperGrid, and an experienced and respected cloud and security software business leader. Prior to co-founding HyperGrid, he was the general manager for the multi-billion dollar converged cloud software business at HPE, where he was responsible for driving product strategy and roadmap across all elements of the converged cloud portfolio. Previously, Mr. Nair served as senior vice president leading strategy and R&D for public cloud at the EMC federation of companies (EMC, VMware, RSA), as well as SVP & GM at RSA where he was responsible for the company’s identity portfolio including the flagship SecurID business and previously helped create the Security Analytics business at RSA. Mr. Nair is the holder of over a dozen patents in systems software, file systems, information management and security, and holds a M.S. in computer science from Clemson University.